Outlet centers have some advantages coming out of COVID 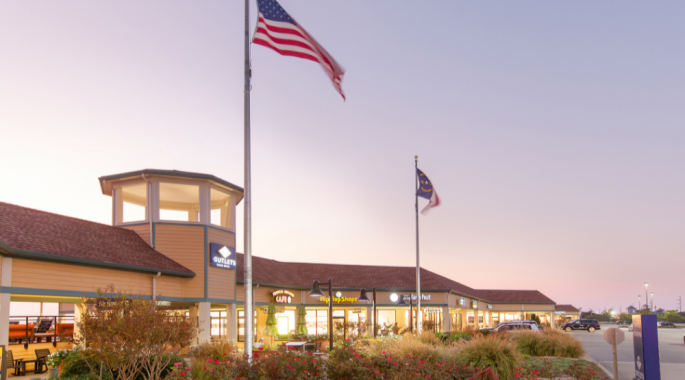 (March 1, 2021) With their abundant outdoor spaces and ample room for social distancing, outlet malls are recovering better than indoor centers. Though not immune to the ills forcing physical retail to reinvent itself, outlets have adapted quickly to the new reality, sometimes in surprising ways.

“There’s a consistent retail feedback theme both in the U.S. and internationally that outlet shoppers are coming back faster and spending more than before,” said TORG principal David Hinkle. “Consumers are telling landlords they want to shop where it feels safe.” While physical-retail sales have declined more than 40 percent since the pandemic, “we’re seeing under half of that now in outlets and in some cases single digits,” said Strategy+Style Marketing Group founding partner and chief strategist Karen Fluharty.

Studies indicate about 215 fully dedicated outlet centers in the U.S., according to Richard Frolik, executive vice president for CBRE and founding member of its Value and Outlet Centers Group. Expect new types of tenancies at these outlets, just as conventional centers have signed unconventional tenants for years to diversify and fill vacancies. At Kansas’ Legends Outlets Kansas City, Aldi is building a 20,000-square-foot store not far from an inline Sephora that joined the center in January.

Multifamily is also coming. Developers have filed plans for an eight-story, 267-unit project called Legends 267 atop an expanded parking deck. And construction of Outlet Malls Apartments has been approved for Texas’ Round Rock Premium Outlets, while an AC Hotel has opened at Simon’s Sawgrass Mills in Broward County, Florida.

Apartment and other nontraditional outlet uses “have been bubbling up more and more in conversations with outlet owners,” Fluharty said. Spurring additional multifamily plans is the population growth spreading out to the once-remote areas where outlet properties located, she says. Other uses for outlet mall vacancies include guest services centers, estate sale auction sites, ghost kitchens, community centers and industrial uses at tough-to-lease back ends of older centers, she said.

Outlets are being used more as last-mile fulfillment locations, even if the sales aren’t always credited to those locations, Frolik said. “There’s more product being moved through them because they also function as major return centers, driving more traffic and generating more in-store sales from consumers who make more purchases while returning items.” And though outlet tenants’ e-commerce channels tend to be less sophisticated than conventional retailers’, they’re advancing, especially with the help of their landlords. Simon, for example, is building online portals for outlet tenants at shoppremiumoutlet.com. Other COVID 19-era innovations include virtual VIP coupon books, touchless pay and virtual shopping concierge services, joining existing curbside pickup and buy-online-pick-up-in-store programs.

While several outlet construction projects were active pre-COVID, developers and lenders have sidelined them, Hinkle said. “I’d be shocked to see any outlet centers go vertical in at least the next 12 to 18 months,” he said.

Work on Simon’s 340,000-square-foot Tulsa Premium Outlets in Jenks, originally slated for 2021 completion, halted in March 2020. Tanger Outlets deferred work temporarily on a 280,000-square-foot center near Nashville. The company noted in regulatory filings, “There can be no assurance that these potential future projects will ultimately be developed.” Another planned center — the $400 million, 566,000-square-foot Los Angeles Premium Outlets — also was scratched in 2020 after Simon and Macerich sued the city of Carson for allegedly breaking pledges to mitigate the former landfill site.

Though outlet sales are besting other types of physical retail, manifold challenges still hang over the industry, particularly at non-A centers, said Fred Meno, president and CEO of asset services for The Woodmont Co., which has taken over three outlet centers during the pandemic. By the time distressed outlets are turned over to receivers like Woodmont, improvements on the properties have stopped. “They’ve already gone through their downturn, so we really have to pull back the throttle to get them out of a death spiral,” he said.

Every national tenant in Woodmont’s outlet centers has asked for lease modifications or rent relief, Meno said. Creating other complications for landlords are stores that closed during COVID but weren’t required by law to do so. Co-tenant clauses typically require 70 to 80 percent occupancy, and cheaper rents kick in if occupancy falls below that, Meno said.

One outlet mall Woodmont started leasing, Outlets at Corpus Christi Bay in Texas, opened at just 50 percent occupancy in March 2017 and was sold at auction just 22 months later to an Oklahoma firm. The mall, about 15 miles west of downtown Tulsa, “would have never opened in the old days unless it was 80 percent pre-leased,” Meno said. Plans now call for about half the property to convert to industrial use.

Relatively robust retail sales aren’t accurate barometers of a center’s health these days, Meno said. A center performing at $350 per square foot easily can fall into receivership if it had been bankrolled at expected $500-per-foot sales. “If a 10-year loan comes due, the center can’t cover its debt service due to [COVID-related] reduced rents,” Meno said. “This is what’s cycling through the entire industry.” The “hammering of apparel sales,” the outlet industry’s leading category before online sales escalated, also has created challenges, Meno said.

The outlet mall tenant universe isn’t constricting as much as traditional malls, but dozens of brands are exiting. Heritage Brands is closing all 162 of its outlet-mall stores this year, including Van Heusen, Arrow and Izod stores and lingerie sellers Warner’s and Olga. The 2020 bankruptcy of Ascena Retail Group — which owned such store brands as Ann Taylor, Loft, Lane Bryant and Lou & Grey in a 1,500-store portfolio — could have been worse. The $540 million purchase of Ascena by Sycamore Partners affiliate Premium Apparel in December rescued roughly half of those locations. Ascena earlier had sold off Catherines and Justice. Before the closings, Tanger had 96 Ascena stores, accounting for 4.7 percent of its base rent, it said.

What outlets have in their corner

But there’s still considerable upside. Outlet centers are productive, making up 1 percent of gross leasable retail space while accounting for roughly 10 percent of all retail sales, according to Frolik. Demand for Premium Outlet spaces vacated by bankruptcy has been surprisingly brisk, Simon chairman David Simon said on a third-quarter earnings call on Nov. 9. “We’re signing deals with the best new and exciting brands” and executing long-term and pop-up deals with leading brands, “including names like Prada, Ferrari, Allbirds and Ugg,” he said.

Outlet centers also tend to be nimbler in adjusting to consumer whims, said Hinkle, allowing manufacturers and retailers to test new products and educate consumers about them. “Outlet centers are the original direct manufacturer-to-consumer business.”

In general, retail tenants with expiring leases are gravitating toward open-air centers across most categories, said The Retail Connection senior vice president of brokerage PJ Kaminer. People have grown accustomed to safer shopping and related conveniences and will continue to desire this once COVID is contained, he said. “All of those people exposed to shopping from the safety of their cars won’t be going away.”

Outlet centers align with two major trends in the COVID environment these days: open-air centers and value shopping, said Frolik. They limit the number of shoppers allowed in physical stores, “but rather than waiting in an enclosed space to enter, shoppers can queue safely outside and practice social distancing.” As a result, he added, “we have seen pre-pandemic levels of foot traffic at most outlet centers. They have proven to be very resilient.”

Hinkle believes outlet centers “are as well-positioned as any specialty retail venue out there and will be an important part of the retail’s future.” Added Meno, “You have to adjust your sights to best uses for these outlet properties; the strong will survive and reinvent themselves.”